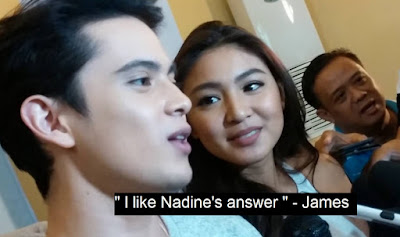 James Reid has finally spoken up about the 'live in' issue with girlfriend Nadine Lustre.


During his interview with Pep, the actor said that he agrees to the statement of his girlfriend which has drawn mixed reactions from netizens.

It can be recalled that Nadine neither confirmed nor denied when asked if they are living together.


'I mean if that was true so what? Di ba? It's like not new anymore. There are younger couples na mas young pa sa akin and it's normal na, come on guys it's 2017' Nadine said.

James reacted on it, saying, 'I don't know about it, but I like Nadine's answer. It's true.'

He also stated that he is not affected about being bashed on social media and clarified the past controversies like being linked to Nadine's bestfriend and the 'phone throwing issue' when Nadine once got angry.

He denied being linked to Mika Tan, his girl's best friend. And even assured that his relationship with Nadine is still 'great' and 'perfect'.