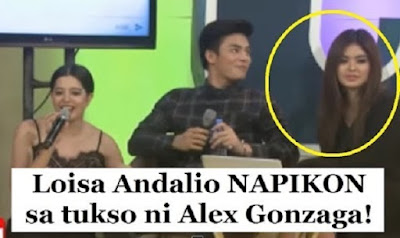 It looks like Loisa Andalio was slightly pissed off by the jokes of Alex Gonzaga during ASAP Chill out last Sunday.

In the video, which was uploaded on Youtube, it can be seen that Loisa was with Ronnie Alonte.

Alex was then telling Sue Ramirez, who has a rumored rift with the actress, to sit beside Ronnie.  Moments after, she was poking fun - possibly related to the conflict between the two who were both linked to the Hashtag member.
'Mamaya ka sa akin'  Loisa, who didn't take it lightly, told Alex.