Home › Unlabelled › IN THIS CORNER OF THE WORLD - RAFAELA FILMS INTERNATIONAL

IN THIS CORNER OF THE WORLD - RAFAELA FILMS INTERNATIONAL 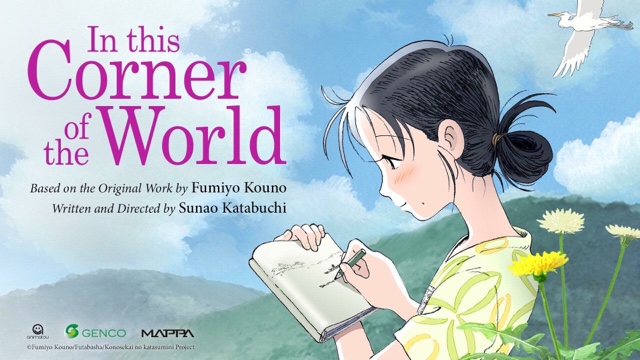 IN THIS CORNER OF THE WORLD tells the story of the adolescent Suzu, who in 1944 moves to the small town of Kure in Hiroshima to live with her husband’s family. Suzu’s life is thrown into chaos when her town is bombed during World War II. Her perseverance and courage, however, underpin this heart-warming and inspirational tale of the everyday challenges faced by the Japanese in the midst of a violent, war-torn country.

In this movie, it tells the perspective of the Japanese during the Second World War in the year of 1944. You will see how they struggle from different kinds of pain emotionally and physically even though the movie is animated you can feel the emotion of every character in the scene. It feels like you are in the war zone during that era.
The film already garnered awards including Animation of the Year at the 40th Japan Academy Prize, Best Music Score for Kotoringo and OfujiNoburo Award at the Mainichi Film Concours. Its latest achievement is getting the Jury Award at the 41st Annecy International Animation Film Festival in France.
"In this corner of the world" brought to us by Rafaela Films International