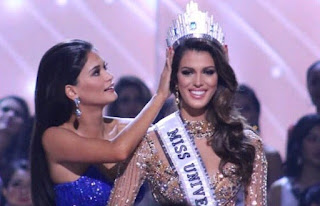 And the crown goes to.... Miss France.

Miss France Iris Mittenaere was named Miss Universe 2016 during the coronation night of the prestigious pageant held at the SM Mall of Asia Arena on Monday.


The newly crowned queen,who is pursuing a degree in dental surgery, bested other 85 contestants from across the globe and ended her country's 63-year drought.

During the Q and A portion, she was asked which failure made a mark in her life and how she learned from it. In response, she said she had failed several times to represent her country, and that she learned to keep on trying and keep going.