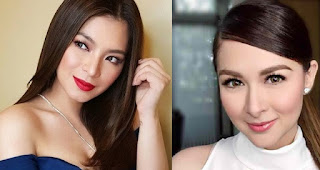 Angel Locsin and Marian Rivera had exchanged messages on instagram after the former posted a caricature of herself and Kapuso actress wearing the costume of the Pinoy super heroine,'Darna', last weekend.

The Kapamilya actress tagged Marian, who joined her as the newest celebrity endorser of Avon make-up, in her instagram post.

Angel played Darna in a televisIon series back in 2005, while Marian portrayed the role in the 2009 series.