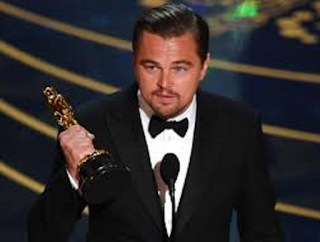 After six nominations, Leonardo DiCaprio has finally won his first Oscar award for his role in 'The Revenant'. He was named Best Actor at the 88th annual Academy Awards and received a standing ovation as he picked up his award on Sunday night.


In his acceptance speech, Dicpario said: "Thank you all so very much! Thank you to the Academy and all of you in this room."

"The Revenant was the product of the tireless efforts of an unbelievable cast and crew."

"I have to thank everyone from the very onset of my career."

"Making The Revenant was about the man's connection to the natural world, we felt in 2015 it was the hottest year on the planet. Climate change is real, it's happening right now, it's the most urgent threat affecting our entire species, we need to work right now and stop procrastinating."
Movies
Next article Next Post
Previous article Previous Post
‹ Newer Post Older Post › Home