BORN TO BE A STAR launches by VIVA and TV5 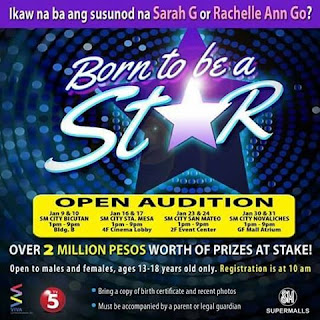 VIVA communications, Inc discoverer of the world-class Filipino performers and home to some of the country's biggest names, like Sharon Cuneta, Regine Velasquez, Rachelle Ann Go, Mark Bautista and Sarah Geronemo,  launches a nationwide search for the next singing superstar via a new reality singing show on TV5, Billed "BORN TO BE A STAR," the weekly competion will air on Saturday primetime starting february 6. 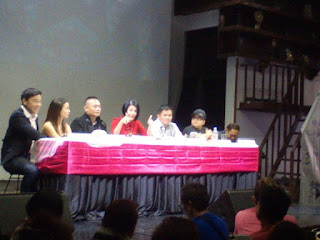 Last January 4, 2016 BORN TO BE A STAR held the press conference in The Music Hall at Metrowalk,
Here is the video during presscon.

Star hopefuls will perform on stage each week until the ultimate star's name is called.

The Ultimate star will receive a total of 3 million in prizes, including 1 million in cash, a 1 million management contract from VIVA artists agency (VAA) and TV5 and a real estate property worth 1 million.

Contestants will have to pass two pre-audition processes before they are able to sing in the show.

Auditions are open to male and female applicants, aged 13-18. Auditions venues and dates are: SM City bicutan on Jan, 9 and 10; SM CITY Sta, Mesa on Jan 16 and 17; SM CITY San Mateo on January 23 and 24 and SM City Novaliches on Jan 30 and 31. Five major auditions legs will also be held in key cities like Cebu, Davao, Batangas, Dagupan and Metro Manila staring March.

Four new constestans will be introduces in the show per week, Each episode will show the "making" of the stars and their back stories apart from the competition proper itself. Viewers can expect to see not just tough and competitive performances on stage but also touching, real-life drama unfold before their very eyes.

Contestants who will make it to the weekly round shall undergo a make-over session and mentoring from some of the country's highly regarded vocal coaches.

A primer will be aired prior to the pilot episode.

So, who will be the countrys's next big thing? will he/she follow in the footsteps of the megastar, the Asia's songbird, the Broadway Gems of the Popstar Royalty? find out as "BORN TO BE A STAR" premieres on primetime television on feb 6 over the Kapatid Network TV5.