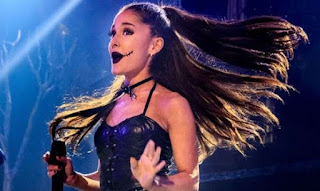 Ariana Grande startled after someone in the audience threw a phone at her during her concert at the iHeartRadio Theater in Burbank, California on Friday, October 30.

The pop singer,who was being interviewed when the incident happened,remained even-tempered as she asked the audience: 'Did someone throw a phone at me?  That’s so dangerous. What if your screen cracked?'

Moments after,Ariana picked up the phone and got up from her seat to ask the audience whose phone it was.Giving it back to its owner,she added: 'Be careful, Take your phone back.'