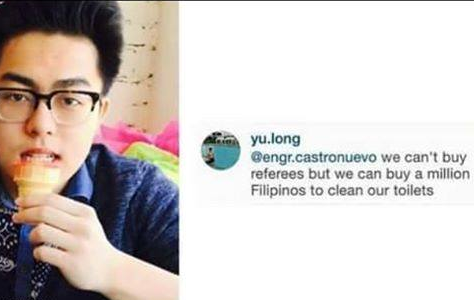 A Chinese instagram user has incurred the wrath of Filipinos after he made a 'racist' comment against the latter.


This came after instagram user (@yu.long) responded to @engr.castronuev who seemingly reacted on the allegation that China's game against Gilas Pilipinas in the Rio Olympic qualifying  tournament was 'sabotaged'.


"We can’t buy referees, but we can buy a million Filipinos to clean our toilet." he wrote.

A screenshoot of yu.long's comment was uploaded on Cesar Apolinario's facebook page and it immediately went viral,garnering thousands of likes,shares and comments.

"Such a shame..do buy a mother, who can teach you how to respect others.. your nation has been so popular unto this world.. by the means of fake products " said one user.


Another user said: "At least Filipino's are hardworking...unlike you substandard Chinese people ....needs to hire a maid just yo clean your toilet...act of laziness.... We might not rich but we know how to respect others...we are not the type of people that will do anything (bad tactics) just to win..without considering if its good harmful already...."