WATCH: Vice Ganda does 'Pabebe Wave' on It's Showtime 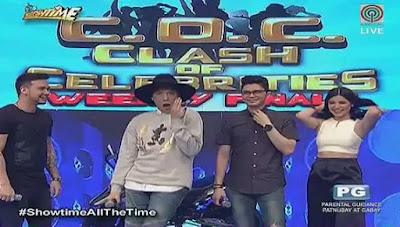 It's Showtime host Vice Ganda unexpectedly mentioned 'AlDub' and even did the 'Pabebe Wave' during the segment 'Clash of Celebrities'.


Vice Ganda,along with his co-hosts,was talking about their respective teams for 'Sine Mo 2' segment when he then told Anne Curtis and Vhong Navarro to have AlDub as a special guest in their team in order for them to win.