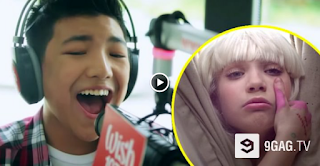 Though he just placed second in the first season of The Voice Kids Philippines, Darren Espanto is still one of the best young singers in the
country. In fact, he's the youngest artist who has an all original solo album and staged a major solo concert.

And, lucky for him, one of the most popular sites 9GAG featured his own version of Sia's hit single 'Chandelier' and even described him as 'crazily talented' because of his singing prowess.

The video,which was taken during his live guesting at the anniversary of the radio station, Wish 107.5, shows how Darren effortlessly belted out high notes of the song while sitting down.