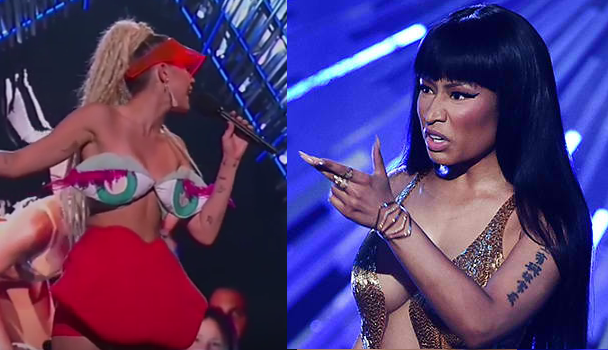 After Miley Cyrus dissed Nicki Minaj over her 2015 MTV VMAs snub,the latter hitted back during
her acceptance speech for Best Hip-hop Video.

“And now, back to this bitch that had a lot to say about me the other day in the press, Miley what’s good” the 'Anaconda' singer said furiously.

The VMAs host,who seemingly defused the tense moment,responded:
"We're all in this industry. We all do interviews and we all know how they manipulate s***. Nicki, congratuf***lations,"

While she kept talking,Nicki can be seen mouthing on the stage and pointing at her.

Apparently,Nicki Minaj was alluding to a recent interview of Miley with The New York Times,in which she called  her “not too kind... not very polite'.


Nicki Minaj Goes Off On Miley Cyrus At The #VMAs.