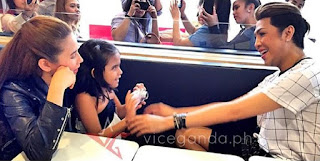 During his segment on 'It's Showtime', Vice Ganda asked the netizens to 'like' and 'retweet' on instagram and twitter,respectively,the photo he has posted to help the blind child,named Maria Malijan,see again.

A simple 'like' and 'retweet' would mean a lot to the little girl because it was equivalent to 1 peso.


Thankfully,the photo garnered 88,132 'likes' on Instagram and got 27,500 'retweets' on twitter just before the show's episode ended and consequently the little girl took home a cash donation worth P115,632.

Aside from it,she also received a big stuffed toy from Jugs Jugueta and a videoke set from Anne Curtis and Karylle,while Vice Ganda invited her to go swimming in his swimming pool.