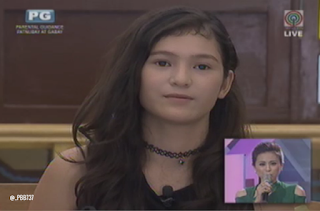 Barbie Imperial dubbed as the 'Dong Along Da Riles' was the first housemate to be evicted from
the Pinoy Big Brother house on Friday Night,July 3.

The 16-year-old housemate,who was nominated through standard voting as she received the most points from her fellow housemates,had received the lowest percentage of text votes from home viewers with 37.84% compared to the other nominee Bailey May who got 62.16% of votes during the show's first eviction night.

Asked about what she has learned inside the PBB House,Barbie said:"Doon ako natuto ng pakikisama ko. I admit na may attitude problem ako. May rason 'yon kung bakit nangyari."

The first eviction night on Friday became a trending topic on twitter with the official hashtag '#PBB7371stEvictionNight' and even made 'Bye Barbie' topped online conversations also.