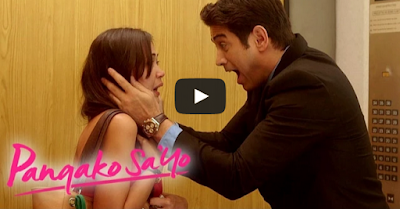 ABS-CBN’s highly anticipated primetime drama series “Pangako Sa’yo” made a
grand comeback on television as the remake of the classic Filipino love story topbilled by Daniel Padilla and Kathryn Bernardo debuted as the most-watched TV  program in the country.

According to data from Kantar Media last Monday (May 25), the pilot episode
of “Pangako Sa’yo” topped the list of most-watched TV programs in Philippines with a national  TV rating of 34%. It is more than double than its rival program in GMA “Let the Love Begin” (15%).

Meanwhile, even before “Pangako Sa’yo” aired its pilot episode, the show’s official hashtag #PSYAngUnangPagIbig already became a worldwide and nationwide trending topic on the microblogging site Twitter because of the fans’ excitement for the new primetime offering.

Helmed by three of the best directors in the country Rory Quintos, Dado Lumibao, and Olivia Lamasan, “Pangako Sa’yo” revolves around the promise of true and never-ending love from two generations;the love story of Amor and Eduardo, who were separated by Claudia, and the couple brought together by destiny, Yna (Kathryn) and Angelo (Daniel).

Don’t miss the exciting continuation of the classic Filipino love story on television, “Pangako Sa’yo,” weeknights after “Nathaniel” on ABS-CBN Primetime Bida. For exclusive updates, log on toTwitter.com/StarCreativesTV and Instagram.com/StarCreativesTV.


Meanwhile, viewers may also catch up on full episodes and past episodes of “Pangako Sa’yo” through ABS-CBNmobile. For more information, please go to www.abscbnmobile.com.