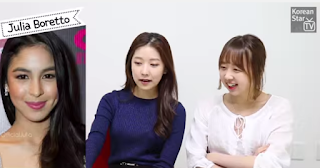 Koreans and Pinoys were never gotten into a big controversy and they never fought each other.In fact,Koreans love the Philippines just like how Pinoys love the dramas,musics and famous groups in Korea.


And this video proved it.
How do these Koreans react to some Pinoy Celebrities?


The above video which was taken from Korean Star TV showed some Koreans who gave
their lightning-quick thoughts of Pinoy Stars' respective photos.Among the celebrities featured were Julia Barretto,Daniel Padilla,Marian Rivera,Kathryn Bernardo and Liza Soberano.

Check out these videos also: