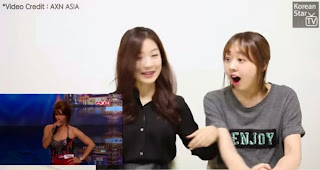 After their video about 'Pinoy Stars' went viral, Koreans has released another video on Korean Star TV Youtube Channel.

This time,Koreans reacted to the performance of Filipino singing trio 'The Miss Tres',who have a feminine appearances with a masculine voices,during their audition in 'Asia's Got Talent'.

Just like the judges in the pan-regional talent search,these Koreans were also shocked with their amazing performance and literally made them laugh out loud.


Moments after,Korean openly said that they were impressed that Pinoys are open to transgender and hoping that their country would also be more opened to transgender.


However,Koreans thanked the Filipinos after getting much attention from Philippines when the video about their reactions to some Pinoy Stars went viral,which has already reached more than 1.5 million views in less than one week